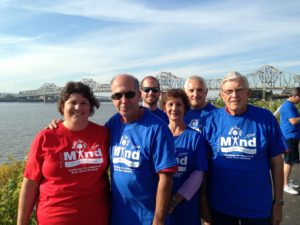 My name is Peggy Bockler and this is my story.

On August 25, 2011, I found out I had a benign brain tumor. This is NOT the news I was expecting and was terrifying to hear. I was home alone and couldn’t believe what I was hearing. I was receiving this news by phone, and was trying to keep it together until the phone conversation was over. I asked how he knew it was benign. He said they could tell by how it looked on the MRI. I felt like I had just been given a death sentence. I have never heard of anyone being OK with a brain tumor. All I had ever heard were stories of death surrounding brain tumors.

This event started when I went to the eye doctor with vision problems in June 2011. I had been back and forth to the eye doctor several times trying to get clear vision. After about the third appointment and getting tired of going back and forth, I decided to be very specific in describing my vision. I commented on how sometimes it seemed like I was looking through a blur or fingerprint. That got their attention. I was given different tests, and with my left eye it was found that I did not have much if any peripheral vision. I also could not distinguish numbers in the Ishihara Test for color blindness. My pupils were not dilating equally. When I read, the letters reading with my left eye weren’t as sharp and black as reading with my right eye. My eye doctor wanted to consult with a specialist. He called me the next day and referred me to a neuro-ophthalmologist. When I went to my appointment with him, he did many of the same tests that my eye doctor did. At the end of the appointment, he indicated that he didn’t think there was anything seriously wrong but ordered a MRI to make sure my optic nerves weren’t twisted. Turns out he was wrong, and the MRI showed I had brain tumor called a meningioma.

My next step was to see a neurosurgeon. People kept asking me if I liked him. How do you like someone who is telling you that you have a brain tumor, that it is small but in a bad place and that it needs to come out or I will some day go blind and eventually die? I was told I would need a craniotomy and that my incision would run from right above my left ear to a little past the middle of my forehead. He said he would need to break a portion of bone to get in to remove the tumor and my bone will be put back in keeping it in place with titanium screws. I sat there and couldn’t believe I was being told these things. It didn’t feel real–like I was having some kind of out-of-body experience. I was numb. My surgery date was set for September 21, 2011 at 1:00 p.m.

It seemed like it took forever to get to my surgery date. The waiting was the hardest part. I just wanted it to be over with. I remember waking up in the ICU and seeing a nurse. I later remember seeing my husband, my dad and one of my sons. I didn’t have any idea what time it was or how long they stayed. It was a long night.

I had my surgery on Wednesday and was sent home on Saturday. It was a rough couple of weeks, but after that I improved each day. I feel blessed that my brain tumor was able to be completely removed. I feel blessed that I didn’t have any surgery complications. It turns out that I did like my neurosurgeon. He’s a gifted doctor whose skill saved my vision and my life.

It’s been almost three years since my brain tumor was removed. My head feels numb and different where the craniotomy was and sometimes hurts. Depending on the weather I sometimes have pain and pressure in my head. I don’t mind this discomfort because it reminds me that I’m a brain tumor survivor, that I’m stronger than I thought I was, and that if I can face a brain tumor and brain surgery then I can handle what life throws at me.