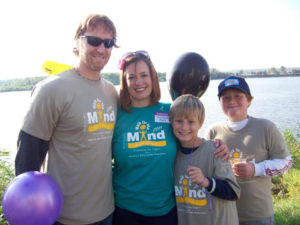 On January 23, 2008, my family’s and my world came crashing down.  After a bad neurological reaction to an antibiotic, I was told I had a brain tumor.  My grandpa, whom I was close to, died of GBM in 1992, so it was especially devastating for our family.  I’m not sure anyone had recovered from his death, nor am I sure we’ve recovered to this date.

Anyway, the neurologist I had at the time would not send me to a neurosurgeon, because there was a possibility it was MS.  I pressured her until I got the referral–and switched to a different neurologist.  Four local neuro surgeons advised against surgery since the tumor was in the right insula–too deep for their comfort!  I joined a support group and learned about Dr. Mitchel Berger at UCSF.  We planned to change our insurance on January 1, 2009, and Dr. Berger called me on January 2.  He told me that he felt he could remove the tumor with 1-1.5% risk.  We made the decision to make the trip to San Francisco in June of 2009.  So on the plane I went with my husband, my sons ages 6 and 8 at the time and my mom.

I had an 8 1/2 hour surgery on June 29, 2009, and it was a gross total resection of a Grade II Oligodendroglioma.  I did not require any chemo or radiation, and at my two year MRI this past July, the hole in my head showed no signs of residual or recurrent tumor.  Hooray!  I now go to a neuro-oncologist in Chicago every four months for my MRI and appointment.

I really LOVE participating in the Mark Linder Walk for the Mind every year.  I have attended other events, and this one truly makes me feel special.  The warmth and love that is shown to us survivors is so meaningful.  Thank you to you who put on the event!